When I started selling painted models in 2017, I decided to offer a limited number of models as donations to live shows around the UK. These are usually used as raffle models by the show, but there are no conditions placed on them other than they need to be used as some sort of prize to benefit the show.

When the donation model for the year is announced, show holders are asked to message me with the name and date of their show and the website or FB group if one is available. After I select the shows, the models are sent to the show holder, completely free of charge.

Like our regular models, each donation model is numbered and comes with a certificate of registration.

#17A6100 Luciole was our first donation model. She is a palomino splash; each model has a very different pattern. I initially offered ten models, but only seven shows requested models, so that's how many I made. Each model had the Luciole (Firefly) prefix and a name relating to the name of the individual show. 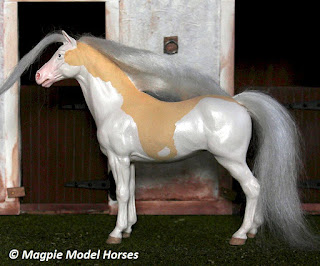 #17A6107 Luciole Kitty Jay's Posy was donated to Dartmoor live. Kitty Jay and her grave are the subjects of Dartmoor folklore. 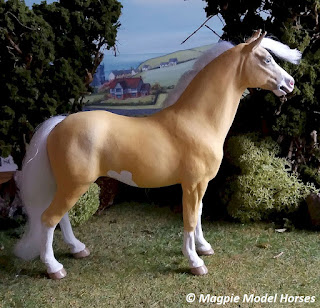 #17A6104 Luciole Ever After was donated to Disney Live. She has a tiny Mickey head as a spot. 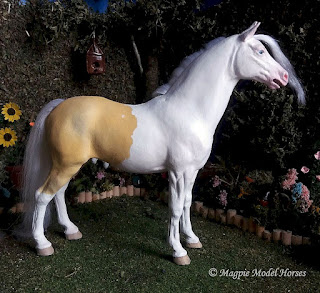 #17A6102 Luciole Kuhamasisha (Inspire) was donated to Inspirations Live. 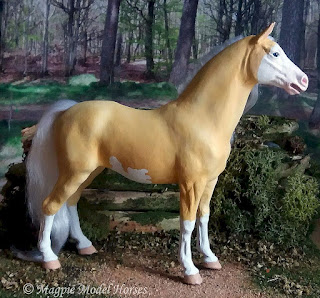 #17A6101 Luciole Lady of the Lake was donated to Lake District Live. 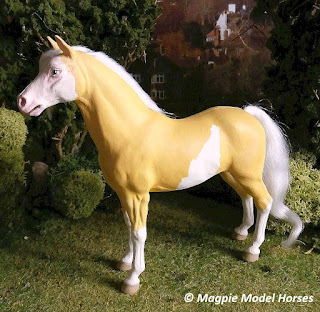 #17A6103 Luciole Give It Lemon was donated to POWIE Live 3. According to Google, in Essex slang, giving it lemon is to make a situation worse by being rude. I liked it for a name as Luciole is rather lemon coloured and making situations worse by saying the wrong thing happens to be my super power. 😆 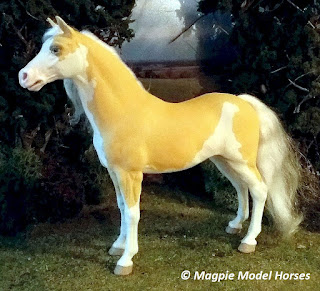 #17A6106 Luciole Limelight was donated to BMECS 2017. This is the championship show for the UK, so I felt the name was appropriate. 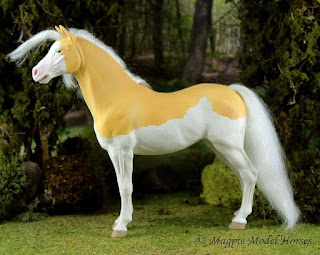 #17A6105 Luciole No Mint in My Julip was donated to Julip Live. Her name is a play on the Julip/Julep homophone. 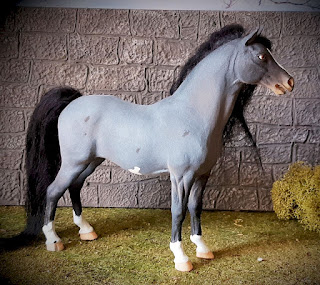 #18A6100 Clair de Lune (Moonlight) is a bay roan sabino with one or more tiny belly spots. Some models have "peppercorn" marks as well. There were six of these models made, plus one for the archive. Clair started life as Lunan Beys which had been rejected from the sales batch for slight flaws and given a frosting of roaning, socks, enhanced blaze, and mohair mane/tail. 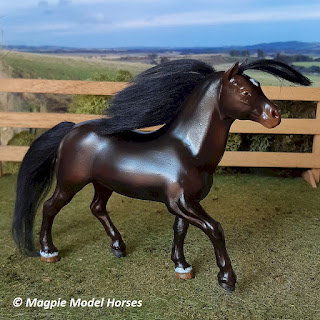 Five of these models were made (plus one for the archive) and donated to My Lovely Unicorn Live, Pukka Panic, Lake District Live, Glaston Didders, and Julip Live.

There wasn't a donation model for 2020 as Magpie was closed from April through August while I was busy with home schooling. 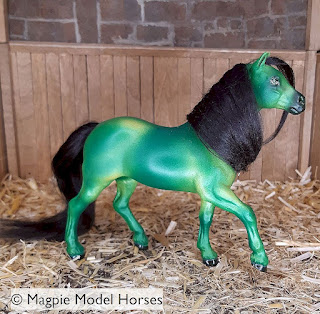 #21W6100 Soi L'nt is a pearly green with yellow shading, green eyes, and black viscose mane/tail. I had the worst time deciding on a green-themed name for this guy - Paris, It's not Easy Being Green, etc. Say his name quickly and say the colour and you should recognize the sci-fi reference.

Five Soi L'nts were made (plus one for the archive) and donated to Hettie's Helpers, Phia's Show, Lake District Online 2021, and two others that I didn't write down - my note keeping was atrocious that year. #22W6200 Baile de Fuego (Fire Dance) is a flame overo with a bald face and four stockings. Each of the five models (plus one for the archive) were made and donated to Sussex Showdown, Dartmoor Live, Recycled Live 2022 , Julip Jitterbug Live,  and the Platinum Jubilee CTF Photo Show.  The model shown is the archive model Pollo Loco. The other Bailes' "stable names" are: Fantasma, Tortuga, Coneja, Danzador, and Cámbaro.

Posted by Heather Forrest at 10:00