One of my first plans, after we bought Magpie, was to pick up where Emma left off on making look-alike foals for the Persies and Specials. I made a spreadsheet of all the Magpies and started planning names and colours. Some foals I've skipped as they're too close to other ones already produced.

Each foal is as as close to its parent as I could manage, some are more successful than others depending on how good my reference pictures were and how well I remembered the colour while mixing paint. Some are closer than others, but I think they all turned out pretty cute. 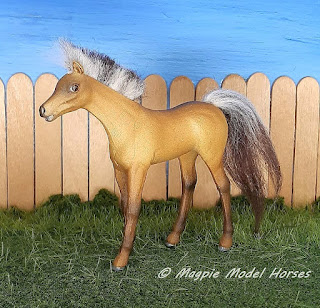 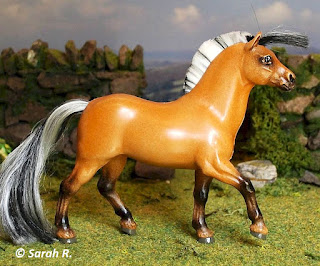 Our first foal was the End of the Summer Special #20F6100 "Fiesta", foal to the 1992 Newsletter Special - Spring Issue "Fjord Pony". Her name refers to the Ford Fiesta model - Ford/Fjord being a common play on words in the hobby. 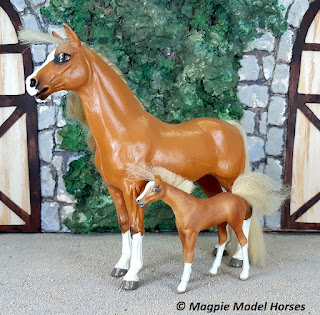 After Fiesta, six foals were released over a period of three months - two models were posted to the forum ten minutes apart. March Special #21F6100 "Patina" is the foal of 1990 Dream Pony Personality Collection One "Copper Bright". The names should really be reversed here as copper starts off bright and develops a patina over time. 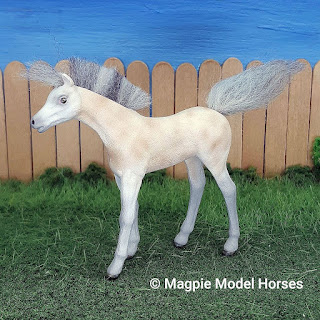 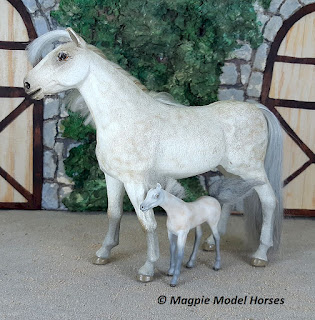 March Special #21F6200 "Duke" is the foal of 1990 Dream Pony Personality Collection One "Duchess". I was working from a very tiny catalogue picture for this model, so the colour isn't quite right. The name association here was pretty obvious.

Soon after painting I found an old sales listing of a Duchess, and a bit later, a Duchess was sold through the Magpie FB group and was purchased by Australia Sarah, so I had a chance to photograph them together. 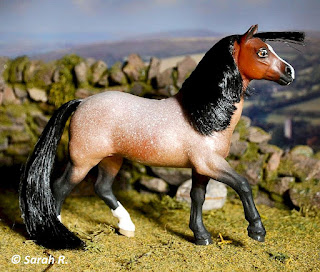 "Cinnamon". This was another one where I was working from a photograph. She's not a bad match, though I think the adult has an orange tone while the foal is more red-toned. Cinnamomum cassia is one of the species used as cinnamon. 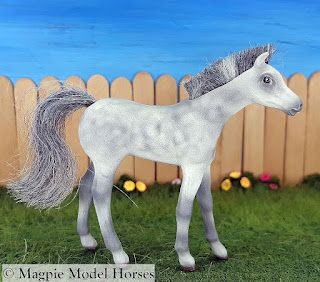 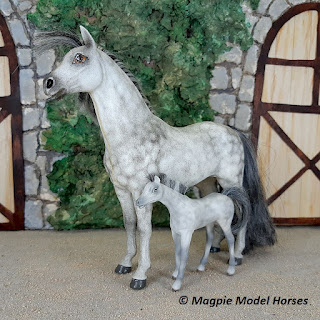 April Special #21F6400 "Dust Devil" is the foal of 1991 Dream Pony Personality Collection Two "Desert Storm". Dust Devil was painted from a photograph, but right after I acquired a Desert Storm of my own - the foal is more blue-toned than her mother.

Dust Devil is relatively small whirlwind, usually visible because of the dust sucked up by the wind, and is something one would expect to be spawned by a desert storm. 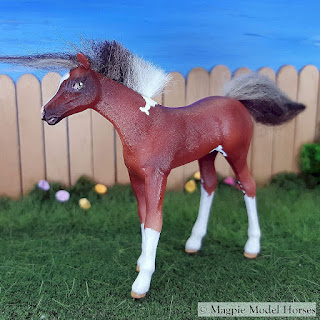 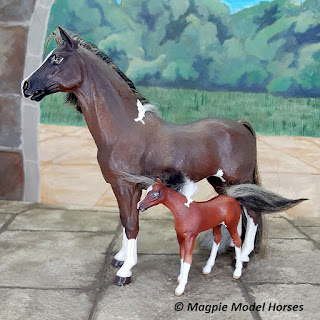 "Brandy Snap". Like Dust Devil I was working from a picture and then acquired the mother soon after painting. The colour turned out way too red, but they still make a nice pair; I guess you could say ginger is spicier than brandy. 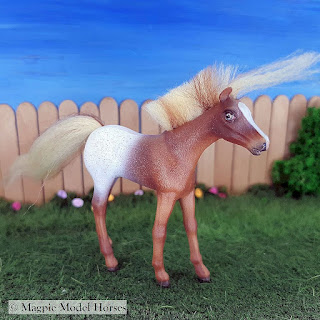 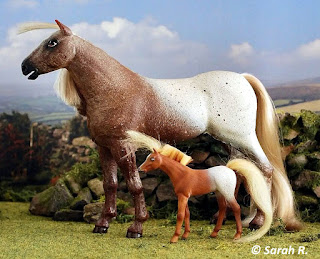 Lastly we have May Special #21F6500 "Mace" the foal of 1991 Dream Pony Personality Collection Two "Nutmeg". This was another photo reference foal, as you can see the colour is off, but hey, foal colours are usually lighter 😁.

Posted by Heather Forrest at 10:00