There are some Magpies which are harder to tell apart than others. Today we present to you the vintage Cremello Arabians of Magpie.

The first cremello was the Newsletter Special "Cremello Arab", which was available from March through June in 1991. According to a later newsletter, only 27 of these models ended up being made.

Unfortunately, we don't have a picture of this model yet and have to rely on the description provided in the newsletter advert: "A pearly cream with flaxen mane and tail and blue eyes" 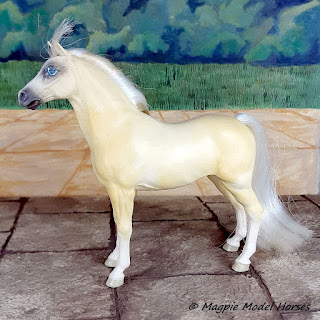 This is the Milne era cremello called "Vanilla". She was a Newsletter special and was available from March through May in 1996.

She has a creamy body, four air-brushed stockings, light hooves, an airbrushed white face, airbrushed grey muzzle and eye shading, flaxen streaks in her white mane, and some rather large blue eyes. 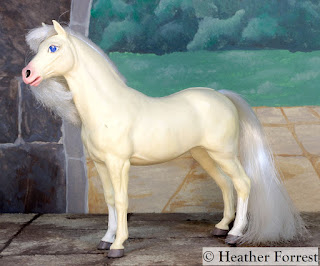 And finally, we have the Adam's era Personality Collection Nine cremello who is also called "Vanilla". She was available to purchase from October 2006 through 2007.

Like the previous models, she has a cream body, but her socks (usually two) are hand painted, her hooves are brown, her mane and tail are pure white, her eyes are a brighter blue and have eyewhites instead of simply filling her eye socket, and instead of grey facial shading, she has a pink muzzle, black nostrils, and no other facial markings. 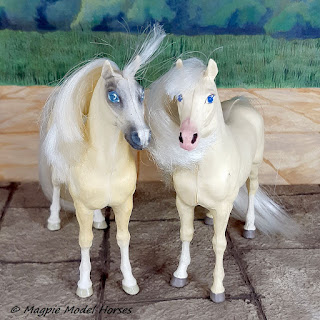 Milne on the left, Adams on the right, showing the difference in facial shading and markings. 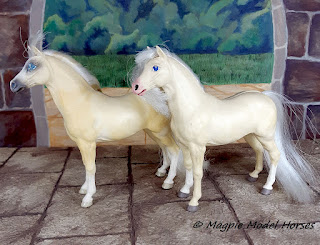 Milne on the left, Adams on the right, showing the difference in body colour and leg markings.

This colour shell for some reason seems to be exceptionally prone to discolouration, so colour may vary and can appear blotchy.